Do Companies Without Hierarchy Really Exist? 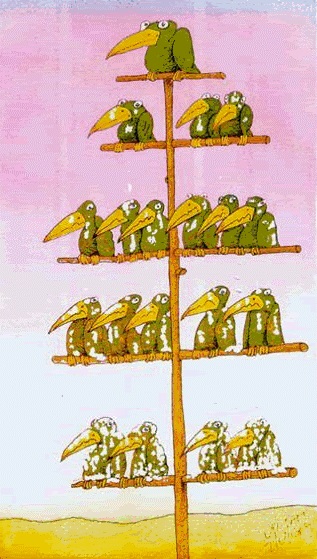 Clarity about a Mistakable Term in the New Work Movement

The topic of New Work increasingly resounds throughout the land and numerous companies have already started courageously to head for a new direction and change the way of working and the corresponding company structures. However, it seems that a big misunderstanding is spreading, when it comes to the topic of non-hierarchical structures, respective network or galactic structures. This is first of all due to the term non-hierarchic itself, which leaves a lot of space for misinterpretation. When hearing this term, many people think that:

It is therefore important to provide some clarity about what the term non-hierarchic means and what network or galactic structures are about.

There is hierarchy and hierarchy

To bring it directly to the point: there is hierarchy and hierarchy!

When we talk about new ways of working, then non-hierarchic can only mean one thing, which is that the usual hierarchic thinking in the sense of precedence and power abuse dissolves.

The word hierarchy originally comes from the following Greek words:

As of the 17th century the church gave the word a new meaning. Since then hierarchy has been connected to precedence, subordination resp. superordination and execution of power. The originally sense and noble purpose of extraordinary hierarchy got lost, while the adapted term – let’s call it ordinary hierarchy – has been burnt into our cells and has been propagandized until today.

The e-value-ation of a person, i. e. the value a person has, strongly depends on the DOING and HAVING of that person, but not on their BEING. The value is for example measured by checking whether an employee has a university degree or not, what kind of knowledge they have, how far they have worked their way up the hierarchy ladder and whether they have influential connections they could probably take advantage of. These aspects – plus some more – form the framework of the usual salary calculation.

Due to the strict precedence and position struggles in ordinary hierarchy there are in addition equally strict communication and decision making processes that have to be followed. Those employees who break boundaries and act beyond their job descriptions or titles are usually reprimanded with the hint that they exceed their authority or their field of action. Consequently, employees oftentimes only take responsibility to the degree that is necessary for their job. Responsibility is rather a necessary evil than a welcomed challenge that can be fun. A construct that many employees rely on is that it is actually the boss who is responsible in the end.

What is also very common in ordinary hierarchy is the fact that decisions are made top down and e. g. new concepts or rules are imposed on employees. “Rank always trumps” is the motto and very often the power connected to a hierarchical position is abused (e. g. in the form of threats, making others small and manipulation or – in worst case – emotional and psychical abuse of employees by bosses yelling at and degrading them).

In an ordinary hierarchy personal goals are usually most important and involve a lot of control to reach these goals.

Ordinary hierarchy is neither good nor bad. It just produces certain results and the experience shows that this kind of organizational structure is no longer useful. On the one hand it prevents organizations from being agile in a fast changing environment and on the other hand the burnout rate with employees based on hierarchical pressure has increased to a level that a reorientation is highly necessary (according to estimations of health experts and health insurance organizations up to 13 million employees in Germany are affected by burnout. You find more about these facts here: http://www.muenchener-institut.de/beratung-fuer-unternehmen/zahlen-daten-fakten/).

The initially mentioned misunderstanding consists of people thinking that it is now all about dissolving hierarchies in organizations completely. However, it is not about that! Non-hierarchic structure rather means that ordinary hierarchy doesn’t work anymore and requires a change in the way of thinking. Hierarchy does not have to vanish from companies, but instead has to change! Therefore dismantling hierarchy does not mean that every employee can do what they want so that the structures result in egalitarianism or a couldn’t-care-lessattitude. This would certainly end in organizational chaos.

In nature and every system that involves human beings, there are power structures, no matter if you formalize them or not. A redirection is therefore based on a natural order. New organizational structures in the sense of network or galactic structures include a natural order so that a dynamic hierarchy arises. This kind of hierarchy is self emergent.

In a dynamic hierarchy authority for a specific context or a specific project is based on what being qualities a person brings, what kind of knowledge and experience they have and what talents they bring. This might be a person that has been working in the company for a long time and has a university degree, but it is not necessary the case. It can for example also be a person, who has been in the company for a short time only, but is so inspired and determined to take on the responsibility and work for the greater principles and vision of the company. In a self emergent, dynamic hierarchy there is no predefined way for taking over a specific role. Who takes over which role in a project shows naturally. Those employees, who are willing to take over a high level of responsibility for a task that matches their talents, show up automatically as so called space holders. In this kind of organizational structure, authority is therefore based on the willingness of taking over responsibility.

Dynamic hierarchy oftentimes results in galactic structures, since employees work according to their experience, talents and being qualities and are thus no longer bound to a certain department or limited by a job title. It is rather about which being qualities an employee brings, i. e. what they are in their core and how they bring these qualities into the company. The game dynamic hierarchy is based on is called Winning Happening. In contrast to the old, well-known game I Win – You Lose the game Winning Happening is not only about cooperation, but rather about creative collaboration. This specifically means that colleagues do not only work with each other, but FOR each other, because the purpose is that everybody wins. This game for example involves that employees are aware of the so called bright principles that are important for a certain project, focus together on these principles and support each other when necessary.

The focus of dynamic, natural hierarchies is therefore that responsible space holders:

Is the change towards a dynamic hierarchy and a galactic structure easy? Certainly not! And: Nobody said it’s going to be easy! Just think of how much people in ordinary hierarchies are identified with their titles and are glued to their power position (also those employees who vividly announce that they don’t cling to their title or position). A radical shift towards extraordinary, dynamic hierarchy does not only require courage, but especially greatness; the greatness to admit that on the one hand ordinary hierarchy existed so far and that you contributed to the game of I Win – You Lose. It is a game that – in smaller or bigger scope – is based on unconscious shadow principles like revenge, envy, jealousy, manipulation, degradation, power abuse, better-knowing, being right, egoism, competition, etc. To admit that you have been part of the game so far, actually to have even played it, is a painful insight.

The essential question is: Are you willing to admit it and start playing a new game?

In the following you find an overview of the different aspects of ordinary hierarchy and extraordinary, dynamic hierarchy through space holding.