Democracy in companies – is that possible? 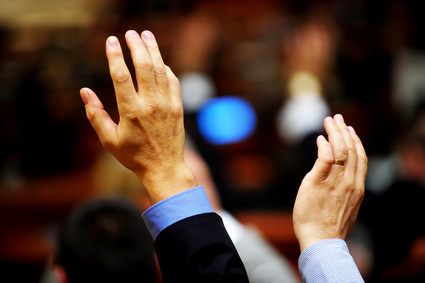 Why in the context of patriarchy democracy can only be sugar-coating?

Democracy in companies today is a very hot topic – at least in the ever-growing New Work movement. There are companies that have already started democratic approaches, for example, that management is regularly elected by the staff. In many meetings and events I hear the following question again and again: “Is democracy possible in companies and is it useful?” A very interesting question, which I want to look at from a different perspective.

My personal opinion to the topic is as follows:

A certain context is needed to make democracy really work. Democracy can thrive only on a context of adult, high or radical responsibility. And the context, in which we are actually still living – which is Patriarchy – is far from being responsible. Democracy within the context of patriarchy is always at risk to be used for patriarchal purposes, which means in an irresponsible way. Everybody might the feel slightly better, but the results are the same.

Typical characteristics of Patriarchy (Domination of the masculine principle) are for example:

There are several factors that lead to democracy can only work superficially in the patriarchal context:

We live in a world of responsibility at child level

When we take a close look at modern Western society, we find that the mass of the people is at a child’s level of responsibility. This at first sounds perhaps disconcerting. What do I mean by that exactly? There are different degrees of responsibility that people are willing and able to take (see chart). When a child makes a mess, in general it does not think about who will clean up the mess in the end. It is mostly the adults who have to clean up. If we apply this to our society just ask yourself: “What is the mess that we create in the world without thinking about who will clean it up later?” Think for example of pollution, the use of weapons enriched with uranium, genetically modified foods and seeds, the ill-considered use of plastic or our habit of buying and discarding, to name just a few examples. We just hope that someone will see to it later! We may not have bad intentions, but the results are no less sustainable.

Our social systems are also promoting a game between parent role players and child role players. In the child role we give our authority and responsibility to “Uncle Sam” and hope that he takes good care of us. Or as employees we give our authority to superiors or the company and benefit from monthly salary payments as well as unemployment and pension insurance, in order to feel secure. On the level of responsibility of a child we are often a victim of circumstances. We believe that we have no choice.

Applied to the topic of “democracy in companies” this means: if employees work on a child’s level of responsibility, they tend to continue to do so, even if they have the opportunity to choose their leaders democratically. Still they will see them as superiors and try to give away decisions, authority and responsibility to them.

The only thing changing is the way how a leader comes to its position. The degree of responsibility the employees take, does not change only by installing democracy within a company. Just think about our society here in Germany – we choose our representatives/leaders democratically. But this has no influence on the level of responsibility that is taken by the individual citizen – it is still mostly at child’s level. When we feel bad, very quickly we say: “Those up there are to blame!”

The behaviour mentioned above is part of a widespread and very popular game, which serves to avoid responsibility. It takes place between two perfectly complementary players:

On one side (on the left) there is the child role player giving their centre and thus their authority away to a so-called authority figure. The person behaves adapted and believes that they are not responsible anymore. They don’t have to make decisions and are therefore not to blame if something goes wrong. The person in authority takes care of everything. The benefit of this behaviour: it is very comfortable! And the child role player feels safe.

On the other side of the board is an authority figure. However, there are two types of authority figures. The first type is well suited to child-role players, because they are parent-role players and love it when they are surrounded by adaptive followers. This person is an irresponsible leader (Gremlin leader), because they only feel safe when nobody challenges their position of power. They keep others small, in order to feel big themselves. They intend on climb the career ladder to exercise as much power as possible.

This interaction is wide-spread in companies and usually takes place completely unconsciously. On the one hand there are employees who like to be left in peace and quiet and don’t want to take any risks and therefore prefer to behave adaptive. On the other hand there are leaders who fear for their position and therefore try to exercise power by keeping others small. Both unconsciously are not taking responsibility!

Responsible leaders who empower other people to make their own decisions and to use their own power, creativity and authority and are able and want to act on an equal footing are not yet widespread.

Applied to the topic “Democracy in companies” that means: As long as the old irresponsible game between child role players and parent role players in business is still running, there is a risk that employees indeed choose their leaders, but both parts continue to run the same game.

The typical organizational structure of patriarchy is reflected in all areas of our society. Whether business, education, religion, etc. all are based on the same paradigms and assumptions and is constructed in the same structure – the pyramidal structure.

The pyramid structure divides the members of each organization into two classes: the ruling class and the ruled class. The pyramid structure gives power through status and position, wherein the amount of power positions is limited and decreases upward. This scarcity of power positions provided in the system automatically leads to competition and rivalry, which increases the probability that especially people with psychopathic tendencies (irresponsibility, ruthlessness, lust for power) make it all the way to the top. This can also happen in so called democracies – just think of Donald Trump, becoming perhaps the next elected president of the United States.

Maybe you’re thinking: “That’s quite normal.” Exactly – that’s the usual normality. The mass is led by a minority possessing all the power. “There cannot only be leaders. Someone has indeed to do the job.” “Employees want to be led.”, these are typical statements that I hear again and again in this context. This principle is so deeply programmed in our cells, that it cannot simply be changed by introducing democracy in a company.

And how easily power can corrupt their holders in hierarchical pyramid structures – even if it was given by democratic election – we know all well. There are plenty of examples in history or even in your personal life.

The prerequisite for democracy to really work and not to be unconsciously used in an irresponsible way, is – whether in business or in society – a high level of responsibility of the majority part of the persons involved. To achieve this state, a process of transformation of the people involved is required, which can only happen at a personal level, and cannot simply be imposed from the outside. And as long as this does not happen, there is always the danger that democracy remains a beautiful illusion, making the people believe that they have a choice, which they might not even be willing to use.

Without changing the context we live and work in, democracy in companies tends to be nothing but sugar-coating.