Without breaking the pattern, nothing will change! 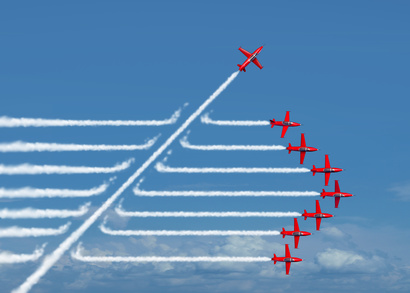 When today’s leaders are supposed to choose tomorrow’s leaders …

It’s kind of a paradox. It’s becoming clearer for more and more companies that a substantial change in leadership and the ways that we work together are necessary in order to stay fit for the future. Some companies are even already on track, taking the first steps in the direction of New Work and experimenting with new approaches. However, as there are as yet no examples of best practice, or blueprints for future organization forms, because we are just about to discover and invent these, companies in many areas often go back to the old and reliable approaches. Understandably! As for example in the field of recruiting:

Everyone is clear that leadership has to work in a different way in the future – more at eye level, less hierarchical, providing purpose etc. But when you look at the job offers or the profiles of the leaders companies are looking for, you will notice one thing: they are still requesting the same leadership qualities and values as they always have. But how on earth can anything ever change when, with regard to the key players, you always look for the same qualities and engage the same people?

It is a well-known phenomenon that Hans is looking for Hänschen (as we say in Germany), or in other words, bosses tend to choose their employees according to the principle “birds of a feather stick together”. This has repeatedly led to conditions where the required qualities within a team aren’t really balanced. In these times of rapid change, this phenomenon creates additional challenges for the recruitment of new managers/leaders:

What can be done when the image of the leader of tomorrow is not yet clear?

I don’t want to be unfair. Current job offers and requirement profiles for leaders also contain soft skills and people-oriented qualities like empathy, appreciation and the like. However these people-oriented qualities mostly compete with figure and results-oriented requirements. And how do you measure the performance of a leader within the company? Also mainly or exclusively from results in the form of numbers, or on goal achievement, which in many cases have even been set by the management board. The conversation about objectives normally does not contain how the leader should achieve these goals. Bonuses are also more likely to be given for achieving “hard” (measurable) goals, and not for “soft” people-oriented goals. In schools and universities the focus is also more on learning organizational, procedural, and figure-based management skills. In no way do people learn to lead people there.

This means that today’s leaders are often still stuck in leading in the sense of „management“, managing processes, where “by chance” people are also involved, being one of the many resources (human resources). Many companies haven’t even done the first step into the direction of people-oriented leading or they are just about to do the first steps, while the ever-changing world outside is already demanding a completely different kind of leadership: free of hierarchy, at eye level, transparent, releasing the self-responsibility and the potential of everyone involved.

In our book “Edgeworker – Leadership was yesterday!” Nicola and I try to describe the new way of leadership more like “Spaceholding”, so that everyone involved is empowered to give their best, to achieve a common, inspiring (because it is ultimately purposeful) goal. Everyone who is willing to take responsibility for the common goal can be a space holder. There is no need for hierarchy or power given by status – such roles would even be an obstacle, because they are based on the game of competition rather than on creative collaboration.

The following map shows the distinction of traditional leadership versus our vision of leadership for the next generation, holding space for a project (note: We used the word “Edgeworker” and “Edgeworking” in the book): 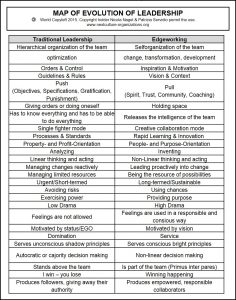 The challenge now, is that leaders who have learned and lived traditional leadership for so many years now, all of a sudden should recruit a new kind of leader, and at the same time change their behaviour to accommodate a new approach of leadership, about which nobody has a clear picture so far. Holy shit, how is this going to work anyway?

Things get easier when we can be clear about where we are at the moment. We are not yet in the new world, but we are about to depart for a new world at best. So what is needed at this moment is not tomorrow’s leaders; The new world is still unknown to us, so we cannot know how leadership in this new world will work, or if leadership will be required at all. What is really needed at this moment in time are leaders in another sense of the word: people who are ready to go first into the unknown. People who are ready and able to lead the organisation into the unknown and through the insecure valley of transition, without already knowing where to go and how it all works.

The following picture makes it clear:

What we know is that the old world does not work anymore in big ways; nor does it bring the results that we wish for. Also unknown is what this new world will look like. It is the time to build a bridge into the unknown to connect the old world with the new world and to pave the way. Like Christopher Columbus did when he departed from the old world to discover a new world – what he was sure about was that there was a new world, but he didn’t know what this new world would look like. And in the end he discovered a totally different world than he thought he would.

And now ask yourself what qualities such a bridge-builder and world-discoverer would need. Here are some examples:

One possibility that could make the transition from the old world to a new world within your organization work, is to install a disruptive department with Edgeworkers who have these qualities and who are working in close cooperation with the management board, having the permission to question everything and to give bold feedback. Like an evolutionary germ cell within the company; A team of researchers which forge ahead with little experiments and small steps paving the way from the old world to a new world, taking the whole organisation with them. To install such a team you normally don’t have to look outside of the company for new leaders or employees, but to scan your current team regarding these precise qualities. And don’t be surprised if you find these qualities in the same employees who were regarded as a problem in the old world.

Have you already installed a pattern-breaker department within your organization? No? Then it is high time. Need ideas? Come with us to start paving the way into a new world of work at the Gaia Is Hiring Unconference in May 2017.